Tell the Corps to Reject the Destructive Yazoo Pumps Project!

THE PUMPS ARE A 100% FEDERAL TAXPAYER-FINANCED PROJECT. NO LOCAL MATCH IS REQUIRED.

The $440 million Yazoo Backwater Pumps Project is an economic boondoggle that comes with a ballooning price tag.

Unlike every other water project in the country, the Pumps were exempted from any local cost share in 1996. The Pumps are a 100% federal taxpayer-financed project that unfortunately offers no real solution to the flooding problem in the Mississippi Delta.

The Army Corps of Engineers’ own analyses make the case against the Pumps. In March, the Corps admitted under the best-case scenario, only 32% of the backwater area would receive any flooding relief with the Pumps.

All lands at or below the 92.3-foot elevation, or 68% of the backwater area, would continue to flood even with the Pumps in place — so just how many homes and farm fields would truly be flood-free?

This reinforces what the Corps made clear in 2007; the project is not designed to protect communities from flooding. Instead, 80% of project benefits would be for agriculture by draining tens of thousands of acres of wetlands to intensify farming.

The Corps has highlighted a very real risk for those downstream too. The agency found that flood stages would rise by a quarter of a foot in the Yazoo River right after the Pumps are turned on. The Corps has not studied the risk Vicksburg and other downstream communities face from pumping 9 billion gallons of water a day into the already swollen Yazoo and Mississippi Rivers.

The George W. Bush administration’s Environmental Protection Agency then conducted its own rigorous analysis before vetoing the project in 2008 based on the Pumps’ environmental impacts. EPA also raised major concerns about the project’s economics and found that less damaging, more affordable alternatives to floodplain management had not been adequately considered.

That analysis was substantiated by the Fish and Wildlife Service and many others. Following a legal challenge by the local Levee Board, the veto was upheld by a federal District Court in Mississippi and affirmed by the 5th Circuit Court of Appeals. EPA’s final veto determination deserves a read by those who readily dismiss it.

Then there’s the Pumps’ astronomically expensive $440 million price tag (adjusted 2018 cost using the Corps’ formulas). Exempted from any local cost-share in 1996, the Pumps are a 100% federal taxpayer-financed project that must compete with every other project on the Corps’ $100 billion project backlog.

Instead of pinning the South Delta’s hopes on the costly, destructive Yazoo Pumps that at best will protect only a third of the area flooded, and will take years to build, backwater communities should take advantage of existing federal programs that can provide relief right away.

Communities across the U.S. are using these commonsense, cheaper measures that could provide immediate, cost-effective benefits for people’s lives, property, and livelihoods in the backwater area.

The Federal Emergency Management Agency’s National Flood Insurance and Flood Mitigation Assistance Grant Programs can be used to elevate existing homes and roads, flood-proof, or do voluntary buyouts and relocations for those that experience repetitive flooding. Other post-disaster programs through the U.S. Department of Housing and Urban Development can help communities rebuild their infrastructure with funds available to reduce the risk and damages of future storms and flooding.

For example, Louisiana created a homeowner assistance program as part of the state’s response to destructive floods in 2016, which offered voluntary buyouts for those living in especially flood-prone areas so they could move out of harm’s way. Homes on purchased properties will be demolished and the land restored back to green space that will help store future floodwater.

The U.S. Department of Agriculture offers another set of conservation programs that can provide relief for affected agricultural landowners. The Wetlands Reserve Program (WRP) compensates farmers who volunteer to take their land out of crop production and restore it back to wetlands.

The backwater communities deserve an affordable, practical, and science-based plan for managing the risks that come with being in the Mighty Mississippi’s floodplain. In fact, EPA used input from an interagency task force and broad group of stakeholders to develop such a strategy for the Lower Yazoo River Basin in 2000.

That alternative plan to the Yazoo Pumps relied on a combination of small-scale flood protection measures, conservation easements, targeted flood-proofing, sewage and drinking water infrastructure improvements, and economic revitalization to bring real and lasting benefits to the South Delta. Another bonus of the strategy – it’s a bargain compared to the Pumps’ $440 million ballooning cost.

While Congressman Bennie G. Thompson has urged the deployment of existing federal programs to provide immediate relief for his constituents, this economical, forward-thinking plan has received little support from other Mississippi leaders.

Now is the time to implement these proven, pennies-on-the-dollar solutions that are available right now to help the South Delta recover and plan for the future. The time for the expensive, ineffective Yazoo Pumps’ has come and gone. 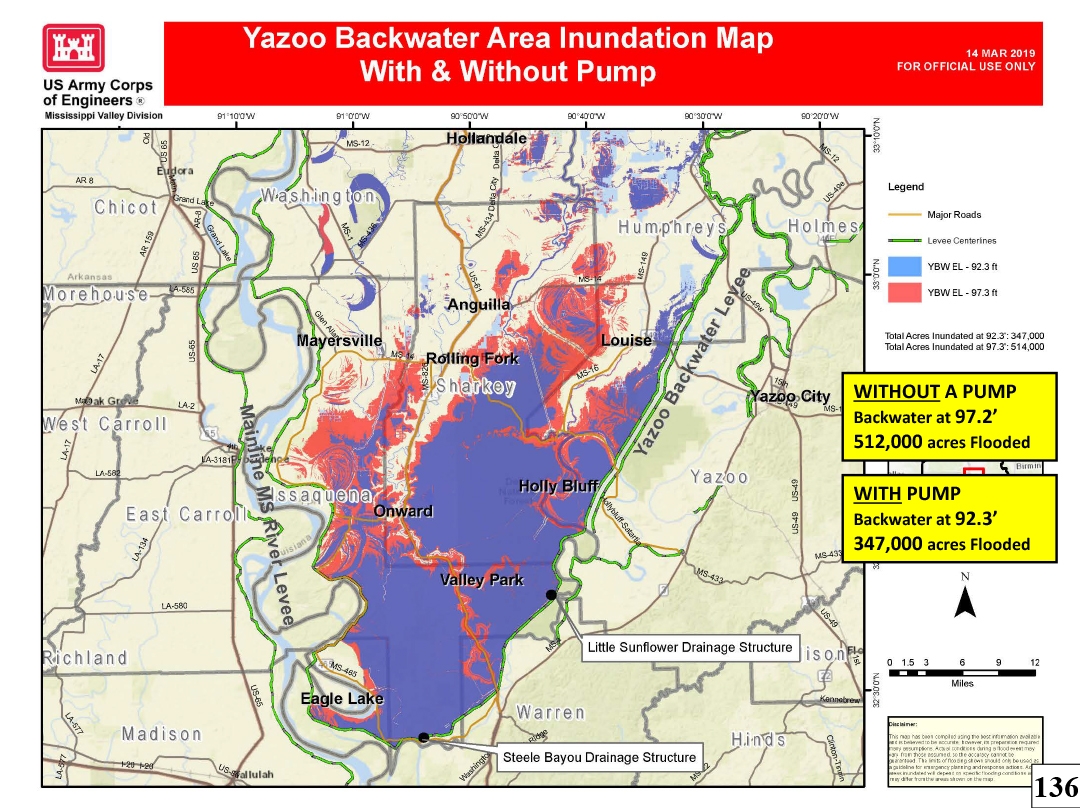 TELL YOUR CONGRESSMAN – DUMP THE PUMPS!